Forgiving Trinity by Liz Reinhardt is an honest look at drug addiction and how complicated recovery can be. The story centers around Trinity McCabe, a high school junior who spent the better part of her middle and high school years in a drug-induced blur. We meet Trinity as she returns from an extended visit at her uncle’s house, where she was sent to begin sobering up after she caused a car accident and let someone else take the blame. Armed with a clearer head than she’s had in years, Trinity must face her family, schoolmates, and reconnecting with life. Luckily, Trinity gets a lot of support from her parents, brother, therapist, and–oddly enough–Aidan, the boy who took the blame for her.

Aidan ends up being a continuous source of support, friendship, and, eventually, romance for Trinity. Heading back to school knowing that everyone is talking about you behind your back and pre-judging you while trying to avoid an older crowd of friends as you attempt to cultivate new friendships is an amazingly daunting task. Most people in this situation could use an Aidan in the corner, although, sadly, I think true Aidans are fewer than they should be. Without the constant reassurance he gives Trinity, even when she tries to refuse it, I can’t imagine anyone settling into their new mindset and life as comfortably as she does. As the relationship between Trinity and Aidan grows, he also becomes too perfect, so I was happy to eventually see some chinks in his shining armor. (Don’t forget to check out my interview with Aidan!)

While I have never had to recover from an addiction, I know people who have and I think that Trinity’s experience is an excellent depiction of the conflicting emotions and issues that arise for both the addict and his or her loved ones. I also enjoyed Trinity’s interactions with her brother, Christian, since many stories of addiction focus on the addict’s relationships with parents, spouses, and children, and while a sibling relationship is not as “important” as those I just listed, brothers and sisters are as affected by addiction as the rest of the family.

Even though Trinity had a large support group to help her as she rediscovers herself, I liked that she was strong in her own right. The story description on Goodreads makes it sound as if she makes a huge, horrible mistake, which I did not find to be true at all. She does make some mistakes and is far from perfect, but Trinity’s poor decisions are fairly minor in the grand scheme of things. The lack of a huge bad decision did not ruin the story for me at all, however; it made Trinity’s experiences ring all the more true. Outside of Hollywood, it is rare that one poor decision is truly a “disaster,” especially when you are a fairly privileged high schooler.

For an uplifting look at a girl fighting her addictions and winning, check out Forgiving Trinity. The emotions and issues surrounding recovery are accurately portrayed and Trinity’s love interest is a total sweetheart.

At seventeen, Trinity McCabe has already made enough mistakes to fill a lifetime. Especially the one where she got high, drove a car, and almost killed a dog. And then let her friend Aidan take the blame.

She’s clean now and desperate to fix the messes she’s made, but first she’s going to have to get out of her pajamas.

As Trinity struggles to stop sleepwalking through life, she faces the painful, tingling sensation of waking up. It’s sometimes embarrassing (she really didn’t want to have lunch with Aidan’s mom), sometimes terrifying (group therapy is beyond intimidating), and sometimes, amazingly enough, pretty romantic (who’d have though Aidan would be such a great kisser?)

Trin is lucky, though—luckier than she deserves, she’s sure—and she doesn’t travel this road alone. Her family, her therapist, and her new friends are all pulling for her. And it turns out, some of them have made pretty big mistakes, too.

But before she can embrace her new life completely, Trinity has to be forgiven by the one person who is holding out the hardest: herself. It’s not easy changing everything, especially when you don’t think you deserve a second chance. Trinity might make an even bigger mess of things before she figures that out.

When the smoke clears on her latest disaster, will anyone still be standing there?

Liz Reinhardt was born and raised in the idyllic beauty of northwest NJ. A move to the subtropics of coastal Georgia with her daughter and husband left her with a newly realized taste for the beach and a bloated sunscreen budget that exist right alongside an intense longing for the bagels and fast-talking foul mouths of her youth. She loves Raisinettes, even if they aren’t really candy, the Oxford comma, movies that are hilarious or feature zombies, any and all books, but especially romance (the smarter and hotter, the better), the sound of her daughter’s incessantly wise and entertaining chatter, and watching her husband work on cars in the driveway. 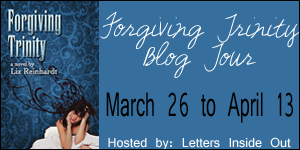 Enter to win either a copy of Liz’s other novels Double Clutch or Junk Miles (3 of each are up from grabs, but are US only) or an ebook copy of Forgiving Trinity (3 of these are available too AND are available to international fans, too) on this site. Just scroll down and enter via the Rafflecopter, but do it soon–the giveaway ends on April 20th.