The Last Vampire Is Back

Today’s post has been written by author Kathryn Meyer Griffith, who shares how she came to republish her novel The Last Vampire 20 years after it was originally published.

The story of how I came to write, publish and rerelease my end-of-the-world vampire love story The Last Vampire–Revised Author’s Edition again twenty years after its initial release is a long strange tale. Looking back over my forty year writing career most of the origins and journeys of my fourteen published novels are all pretty strange. Ask any author who published in the 1980’s to now and you’d get a lot of the same bizarre accounts. Publishing back then–and now–was not for the faint of heart.

In the beginning, as all authors had to do before the ebook publishers and the Internet, I dealt with the slow-frustrating-time consuming old-fashioned way through snail mail, editors and agents. Sometimes between the writing, scouring for a publisher, getting a contract with that publisher, getting the manuscript ready to go on the book shelves and what you had to put up with during and afterwards could be enough to drive any sane writer crazy. I mean…it all took so long.

I started writing The Last Vampire around 1990. With the help of Dean Koontz I’d gotten my first agent in 1990. She’d already sold my fourth book, Vampire Blood, to my new publisher Zebra and I had begun work on my fifth novel, The Last Vampire. I know, I know. Another vampire novel?

But as I began writing it I realized it wasn’t going to be just another vampire novel. This book would be a saga about the end-of-the-world, about personal courage, the destruction and fall of society and about what humans–and vampires–would have to do to survive in the new merciless world after earthquakes and anarchy had taken their tolls. I wanted to transcend the vampire novel genre. Or, at least, try to.

I even threw in a little inside joke on the other top horror writers of the day by using their names for the other bloodsuckers in the ruthless vampire gang my main character goes to war against.  Stephen. Dean. Anne. Chelsea. And so on. Hmm, though, no one ever got the joke…or never told me if they did.

I’ll admit it now because it’s so many years later, I’d also used the book as therapy to deal with an increasingly frustrating situation I was experiencing in my real life at work. Age discrimination. My new art director thought I was too old to be a senior graphic artist and had been making my life on the job miserable. He’d openly demoted me; was overworking me. Besides my regular workload, he put a couple younger artists over me who bossed me around. I spent half my day doing their copying duties and being their gofer. I guess I got even by writing about it (imagine, my main character was a graphic artist, or used to be before the world fell apart) and killing the art director off in the book; then, for good measure, destroying the whole city of St. Louis (where I worked). 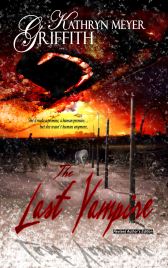 Well, between working full time as a graphic designer, raising a son, keeping a husband happy, and being there for my large family I struggled to finish writing The Last Vampire. Got it done and Zebra paperbacks brought it out in 1992 with little fanfare. I’d had the usual over-worked disinterested editor. I had to fight hard for the integrity of every word. And I hated the cover. A kneeling woman (supposedly my main character vampiress) in a blindingly white snowy background. So bland.

I thought it was the best thing I’d ever written. I truly believed in it and its story. It was my baby and I hopefully shoved it out into the world and…nothing.

It was long before the Internet, emails, blogs, web review sites, and editing on the computer. I didn’t know how to promote. Apparently, they didn’t know how to either. I never got one review that I knew of and never any feedback besides the dismal royalty statements…which never made any sense to me anyway. The book didn’t sell well, they said.  Too bad. So sad. Go on and write another one.

Over the next twenty years I went on to write and publish nine more books, seven short stories and a novella. Then in 2010 Kim Richards at Damnation Books/Eternal Press contracted two of my newest horror novels and asked if she could reprint, with new covers and all in ebooks for the first time ever, revised editions of all my older novels. I said a resounding yes! and now all of them will be out again by July 2012.

And The Last Vampire–Revised Author’s Edition? It’s finally come into its own after all these long years. Most of the reviews have been glowing.

“The earthquakes, the global floods and the devastating fires arrive first. The human race, displaced and panicked, at first flees, migrating to any place there’s food and shelter.

Then the worldwide plague arrives with its stench of death. And as mankind suffers and dies out, vampires, their numbers dwindling from the same sickness, struggle and fight fiercely among themselves to survive in a world where there aren’t enough humans to feed upon. As the months go by they become fewer, more desperate and more ruthless. Emma, as the world disintegrates around her, finds herself alone, her family dead…and fighting off an unnatural hunger as she becomes one of the undead. Defying her unwanted destiny she’s determined to resist the bloodlust she feels, the need to kill and feed on human blood, of losing her humanity, for as long as she can bear it…but she’s so hungry…and the night calls.”

Here is an excerpt from The Last Vampire:

The next morning, Emma faced the bridge.

She wanted to run away. Back to the shelter. Hide her head in the sand. Die. It was insane, trying to go home, and this whole scheme of trekking out to Maine like some brave person. When she wasn’t. What was she thinking?

She looked at the bridge, the water shimmering before her. It had become a sort of a test. Cross that bridge, go home, and bury her past and she could do anything. Even make it to Maine.

Her stomach growled in protest.

“Here goes nothing,” she grumbled, and waded into the frigid water. She regretted that she didn’t have a change of clothing. There was no help for it, she’d just have to build a fire afterwards and dry her clothes out. Taking the rope out of her pack, she held it close. She’d use it as a safety line.

The sun filtered down on her in the quiet early morning, as she swam toward the first stretch of the half-submerged bridge. She was a strong swimmer, but she knew her limits, so she took it slow and easy. She braced herself mentally against what floated in the water around her, or what she would find sandwiched in the sections of the bridge. And the smell. God.

She was shivering so badly when she got there, that she could barely claw her way up on the first section. Her hands cramped up.

Tears of anguish stained her haggard face. She tossed the rope, snagged a broken girder, then torturously pulled herself from the river. After she’d rested a few minutes, she started working her way across the bridge, carefully. She had sturdy tennis shoes on and was glad of it. Waterlogged, they squeaked and left round, wet spots behind her. At the places the bridge dipped or plummeted into the water, or was blocked with debris, she had to find alternative paths.

Once everything under her fell into the water, and the only thing that saved her from being sucked down with it and crushed was her lifeline. As she was hanging out over thin air, twirling at the end of the rope like a dead fish on a hook, she wondered again why she was doing this. Maybe she was touched in the head? She smiled at that. Of course she was.

But she gritted her teeth, wiped her tears away with numb fingers, and kept crawling along the concrete span.

Not all the cars had toppled into the water. Most of the vehicles on the bridge were empty, some weren’t. Emma tried not to look at the decomposing bodies, but it was difficult. They were everywhere.

“This is really stupid, Emma…this is really, really…dumb,” she groaned under her breath, as her weight accidentally dislodged a loose piece of the structure, and, with bated breath, she watched it plunge into the watery depths below her.

Her bad leg gave her more trouble than she expected and soon she was dragging it behind her like a useless dead thing. It took agonizing hours to cross the bridge, and when she finally made it onto safe land, her body was shaking with the exertion,and her hands were scraped bloody. Her clothes were frozen to her like an icy shell. The first thing she did was gather wood and build a huge fire, then hunched over it until her clothes were almost dry. It was too chilly to take them off.

Since childhood I’ve always been an artist and worked as a graphic designer in the corporate world and for newspapers for twenty-three years before I quit to write full time. I began writing novels at 21, over forty years ago now, and have had fourteen (nine romantic horror, one historical romance, one romantic suspense, one romantic time travel and two murder mysteries) previous novels and eight short stories published from Zebra Books, Leisure Books, Avalon Books, The Wild Rose Press, Damnation Books and Eternal Press.

I’ve been married to Russell for thirty-three years; have a son, James, and two grandchildren, Joshua and Caitlyn, and I live in a small quaint town in Illinois called Columbia, which is right across the JB Bridge from St. Louis, Mo. We have two quirky cats, ghost cat Sasha and live cat Cleo, and the four of us live happily in an old house in the heart of town. Though I’ve been an artist, and a folk singer in my youth with my brother Jim, writing has always been my greatest passion, my butterfly stage, and I’ll probably write stories until the day I die.

This tour was put together by FMB Blog Tours.