Irina Lopatina’s White Raven: The Sword of Northern Ancestors is an epic fantasy, like The Lord of the Rings, and was thoroughly impressed with it.

The novel begins with a prologue that introduces Vraigo, the White Raven, and his cousins when they are boys. The prologue also serves to introduce Agar, a magician and mentor to Vraigo who is killed, and some other creatures found in Areya. Then we get into the meat of the story, which is broken into two parts.

Part 1 takes place in Areya. Vraigo and his cousins are essentially grown up (no age is given so I don’t know exactly how old they are) and are making their place in the world. But, Areya is being threatened by monsters from other worlds thanks to an evil wizard called a koschei, and Vraigo and his family are charged with saving the land. Since Vraigo is a magician, he is often misunderstood, especially by his uncle, Dike Vlady, and his cousins Targas and Seles. When Vraigo realizes he must be the person to defeat the koschei, his family thinks that he is afraid to take part in the battle with the monsters. Even though it is against his uncle’s wishes, Vraigo goes out to discover more about the koschei so he can decide the bet way to defeat it. The Duke and his commanders plan for a battle at the place where the monsters are slipping into their world. The koschei steals the Duke’s magically-endowed sword, Urart, while Vraigo is away, basically leaving the Areyans with no chance of winning. When Vraigo returns and learns of the theft, he immediately sets out to find Urart. He search leads him to a community of dwarves living under a mountain and under the threat of the Tanars, who stole Urart from the dwarves. Part 1 ends with a cliff hanger that sets us up for Part 2.

In an interesting twist, Lopatina has Vraigo enter modern times in Part 2. It seems that Urart has made its way to present day Europe and Vraigo must track it down and return to Areya. Luckily, he is befriended by a cave diver named Nik, who helps him get acclimated (as much as he can anyway) and find where Urart could have ended up. The ending of the story is a bit abrupt, but that is because it will be continued in the second book of the series. This part of the story sounded a bit hokey in the description, but it actually flowed into the rest of the plot seamlessly.

This was a great story, although I had a hard time getting into it initially. I thought the prologue was a little hard to get through, but after that, I was reading through with ease. Some of the writing was a little choppy in areas, but I think that may be part of the interpretation. The novel was originally written in Russian and translated into English. The publisher, Light Messages, has tightened the text and translation errors after printing the ARCs though, so that issue should be resolved when you read the final copy.

The book has a LOT of action; it is not a plot that moves by character’s feelings and thoughts. My summary above is really a fraction of what actually takes place. The main characters are well-developed, however, so you understand them and why the plot moves along as it does. There was not a lick of romance, and I didn’t miss it. At all. In fact, I found it to be a bit refreshing.

I liked the parts of the story set in Areya better than those in our modern-day world, although I did enjoy that part of the novel. It just seemed that in current times, Vraigo and Nik spend more time fumbling and blundering around (think Braveheart in the city), while the parts in Areya seem more relevant, suspenseful, and to further the plot more. Since White Raven is part of a series, this section may play a larger part in setting up one of the later parts of the series.

Lopatina provides good descriptions of this unfamiliar world. She is not overly wordy, but still gives a clear picture of Areya and its inhabitants. She also uses familiar beasts in other ways. For example, when I think of a basilisk, I think of a big snake (i.e. Harry Potter), but in White Raven a basilisk is part rooster and part toad (though it still kills you if you look into its eyes).

Even with all of the unfamiliar creatures, it is not hard to keep track of who is who and what each creature is. Lopatina has kept her cast of characters fairly small and without an extensive history so it is pretty easy to keep track of everything. There is also a very helpful illustrated Character Guide at the end of the book. The main characters and unusual creatures are listed alphabetically with a drawing and short description. A map in the beginning of the book helps you figure out the layout of Areya.

If you are looking for a action-packed, gripping fantasy novel, White Raven should be on your short list.

About White Raven: The Sword of Northern Ancestors

The fate of Areya rests with the lost sword Urart. Will White Raven retrieve it before it’s too late?

In the kingdom of Areya, humans, animals, and the magical creatures that inhabit the Eternal Forest have long coexisted peacefully, but now something is horribly wrong. A terrifying stream of monstrous creatures has begun to emerge from the secret depths of the earth, terrorizing all of Areya’s native inhabitants. From the tiny, wise drevalyankas to the bellicose cave-dwelling gnomes to the devious kikimoras who gather roots and herbs in the marsh, everyone is in danger.

With the aid of Urart, the magical sword that has been passed down from the time of the ancient northern ancestors, Grand Duke Vlady can offer temporary protection to his people. But Prince Vraigo, Vlady’s nephew, who is endowed with magical power himself, understands that the source of the evil monsters must be found if there’s any hope of survival. Along with a motley crew of his forest-dwelling friends, Vraigo sets off on a perilous quest in search of the koschei, the powerful, corrupt Archmagus whose mission is the destruction not just of Areya, but of the entire world.

As if this weren’t bad enough, Urart disappears from the duke’s stronghold. Without it, Areya is doomed, and only Vraigo, the White Raven, can possibly get the sword back. This journey requires Vraigo to use all of his keen wits and magical abilities, as well as to ally himself to dangerous creatures like yagas and werewolves, natural enemies of man, and precipitates the young prince into the most bewildering, complex challenge he has faced yet: life in the twenty-first century. 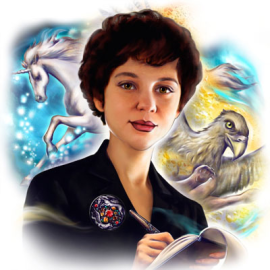 Irina Lopatina lives and works in Siberia, Russia, but her homeland has an even more wonderful and exotic name: Altai. It is a unique place where old Altai Mountains rise high up to the sky, centuries-old forests stretch out as in ages past, and mighty Siberian rivers flow along the plains. Altai is one of the few places in the world where huge, densely populated cities coexist with pristine wild places. Moreover, this is an area of the earliest human civilizations, through which the great migration of people from eastern lands to Europe once took place.

While studying at the Altai State University, Irina devoted much attention to the past of her native land. As a student, she went to the archaeological sites of ancient settlements located on the mountain plateau, where it was only possible to arrive on foot. She remembers moments when it was quite easy to imagine how the ancient people had lived, what creatures neighbored them, and what adventures took place in these vast spaces. Irina needed take only a small leap from there to White Raven, his friends, and his enemies who were ready to begin a journey through the Eternal Forest of Areya.

Of course, it would have been much more difficult for her to create her stories if Irina had not been inspired early on by the works of many excellent fantasy and science fiction writers such as J.R. Tolkien and Ursula Le Guin, the Russian authors Nick Perumov and Svyatoslav Loginov, as well as the wonderfully charming Russian fairy tales where a brave prince, his faithful grey wolf and the evil koschei always live. And so it happens that Irina’s novels are the stories of a distant, semi-fantastic land which, who knows, may still exist next door to us.

Even as a child, Igor Adasikov knew that he would be an artist.

While studying at an art school, he devoted much of his time practicing classical drawing, seeking to depict the world around him as fully as possible. His works often won awards in Russian art contests, and he continued his education at Moscow Art Institute. After graduating from the Institute, Igor worked as an artist preferring realistic painting, such as portrait and landscape. However, his rich imagination still needed an outlet and manifested itself in full while illustrating the fantasy novel, White Raven: The Sword of Northern Ancestors.

Here, in the surprising fairy-tale world, void of any boundaries, the artist found the nourishment to feed his creativity. Having traveled with the heroes through the whirlwind of adventures, he worked to give readers a visible image of Areya, bringing to life the magical creatures that inhabit the land, and making friends with the heroes of this fascinating story.