Maria V. Snyder is one of my favorite authors. I have been hooked on her books ever since I read Poison Study many years ago and have had the happy opportunity to meet her at BEA a few years back. I am a bit behind in her novels and just finished Shadow Study, which is a continuation of the Study Series, but is also the first in a new series called Soulfinders and the seventh novel in the Chronicles of Ixia series.

Shadow Study picks up a few years after Spy Glass and features all of your favorites from the series: Yelena, Valek, Janco, Ari, Leif, Opal, and Devlen, just to name a few. Yelena is still the ambassador to Ixia and Sitia and there is still tension between magicians and the regular people. 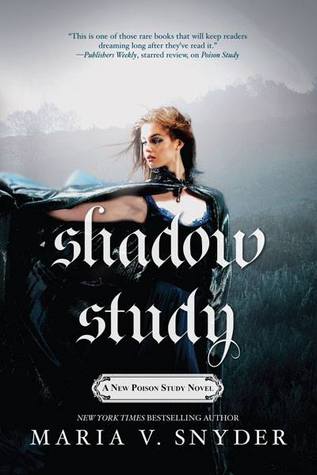 Yelena is attacked with a mysterious substance and loses her magic. Clearly, keeping this devastating loss a secret is key to her survival as is finding out who was behind the ambush.

Valek is still in charge of the Commander’s security, though he seems to grow weary of his position. His life is threatened, which leads to the introduction of an interesting, feisty character.

The view point of the novel bounces back not only from Yelena and Valek, but between Janco and other characters as well. It gives an interesting perspective that wasn’t always found in the other novels, which essentially focused on Yelena and Opal.

Everything that I love about Snyder’s writing is present, such as her ability to develop characters that are exceptionally human; so much so that they stay with you long after the novel is done. Ari’s and Janco’s growing fan base is evidence of this skill. Snyder is notalso adept at developing plot twists that are so natural to the story you wish you saw them coming,

Not much is resolved in Shadow Study, it sets us up for the rest of the series and I cannot wait to see how it ends!