Calling all Downton Abbey fans in the NYC area: you MUST make your way over to Downton Abbey: The Exhibition! I was able to experience the exhibit and loved it!

Located near Columbus Circle in Manhattan, the exhibit is very easy to get to and find. The windows have props and costumes in them, so you really can’t walk by and miss it. 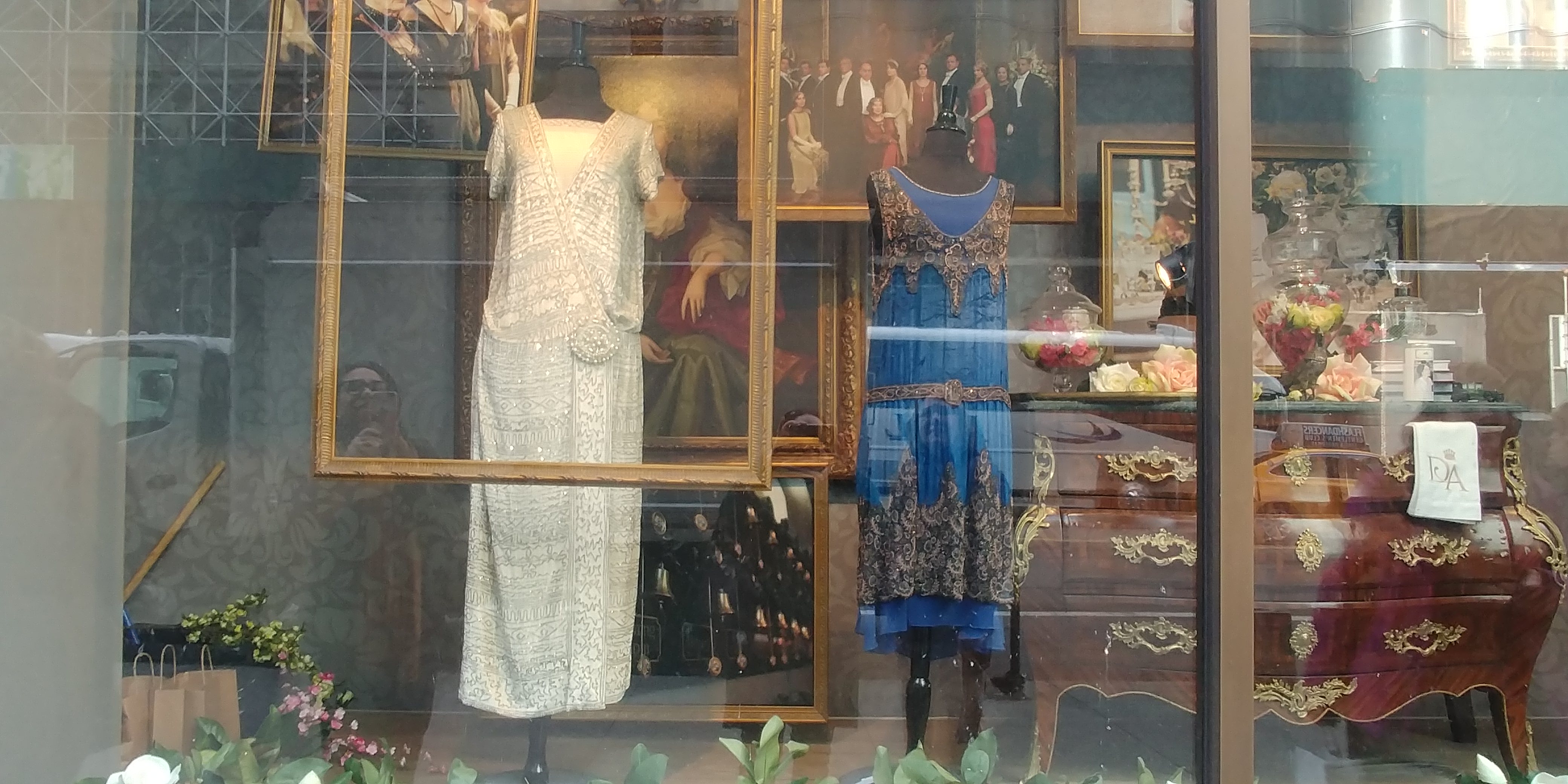 When you enter the lobby you present your ticket and walk into what can only be described as a holding pen. It has velvet ropes, plays scenes from Downton on a tv, is all-around pretty, but it is pen nonetheless. You can have your photo taken on a green screen with a number of Downton locations to choose from as your background. Once whatever group is ahead of you has moved past the introduction room, the doors open and you enter the exhibit.

The first stop is the introduction room. It features a video that includes a number of cast members, including Robert, Cora, Mr. Carson, and Mrs. Hughes. Once the video concludes, you move through the exhibition at your own pace.

Since the exhibition begins on the ground floor, it is fitting that it starts Downstairs. You turn a corner and find yourself in Mrs. Patmore’s Kitchen. Throughout the exhibition there is exceptional attention paid to small details, and this focus is found in the kitchen. It smelled like baking cookies (which made me hungry since I was visiting on an empty stomach) and the tea kettle has real steam coming out of it. 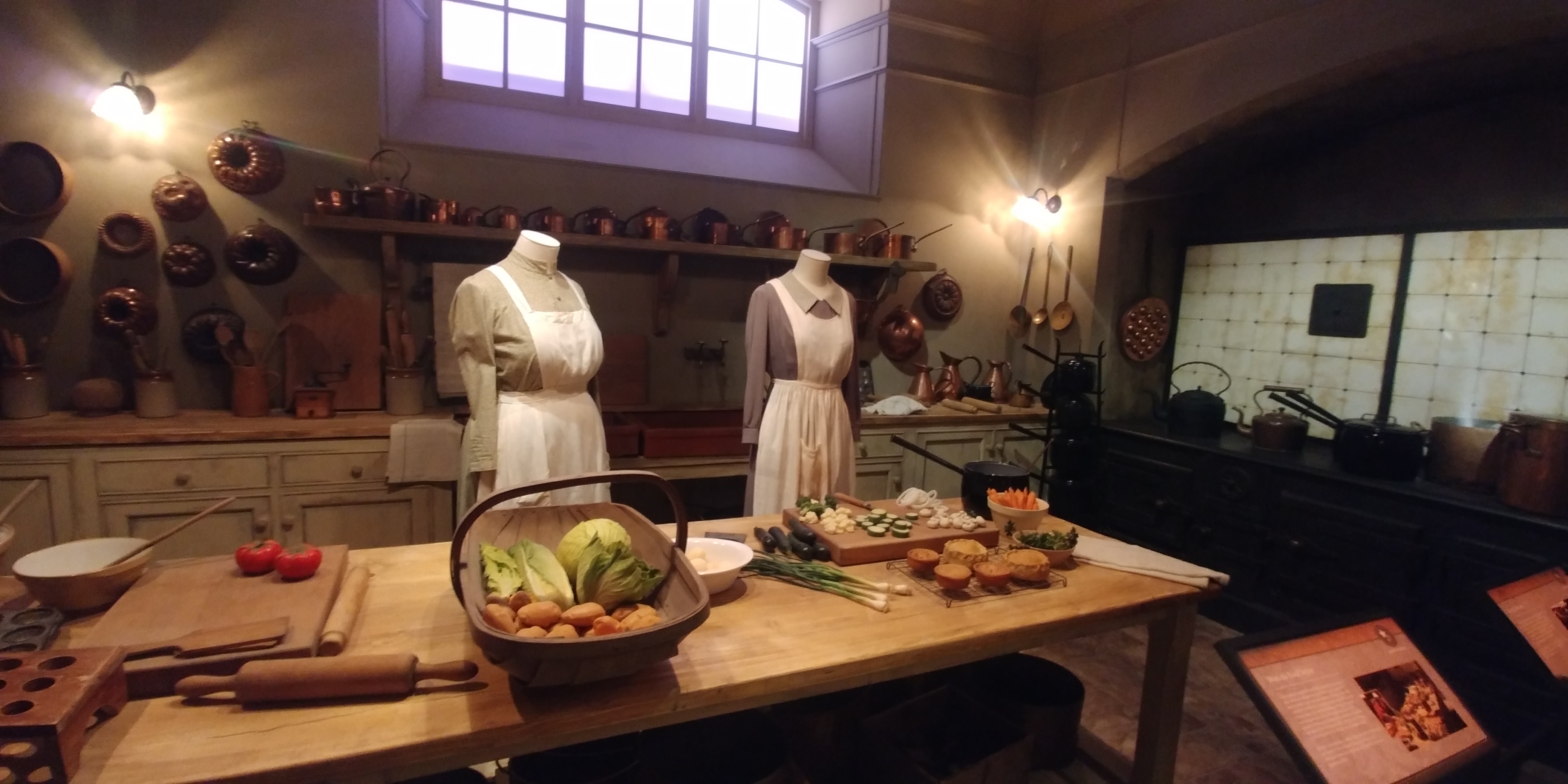 Then around the corner you go, on to the next location. The hallway even looks like the hallway in the show, but with fun extras that give you a glimpse into life at that time.

The next room is the Servants Hall, complete with a piano and the bell wall. 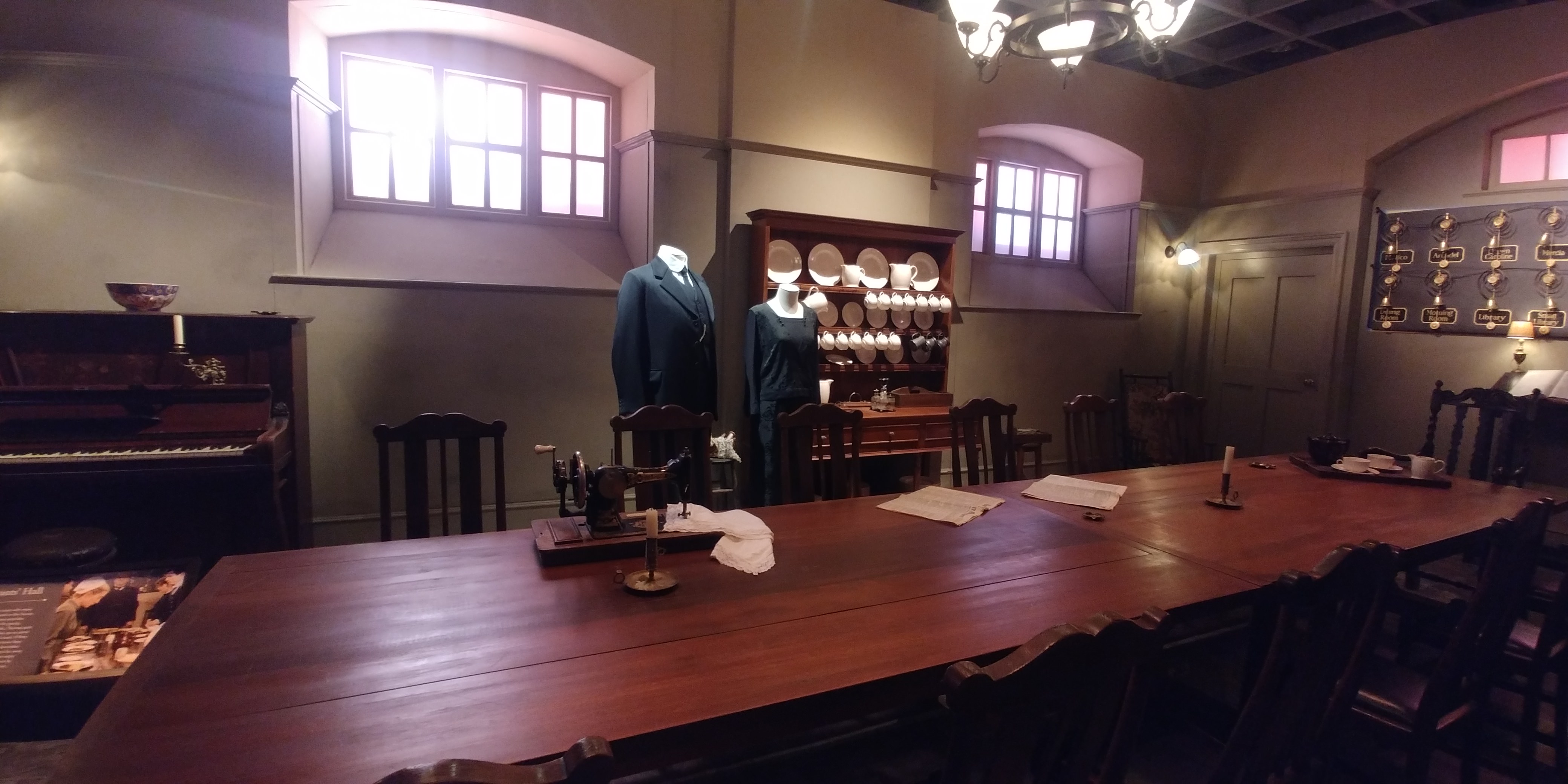 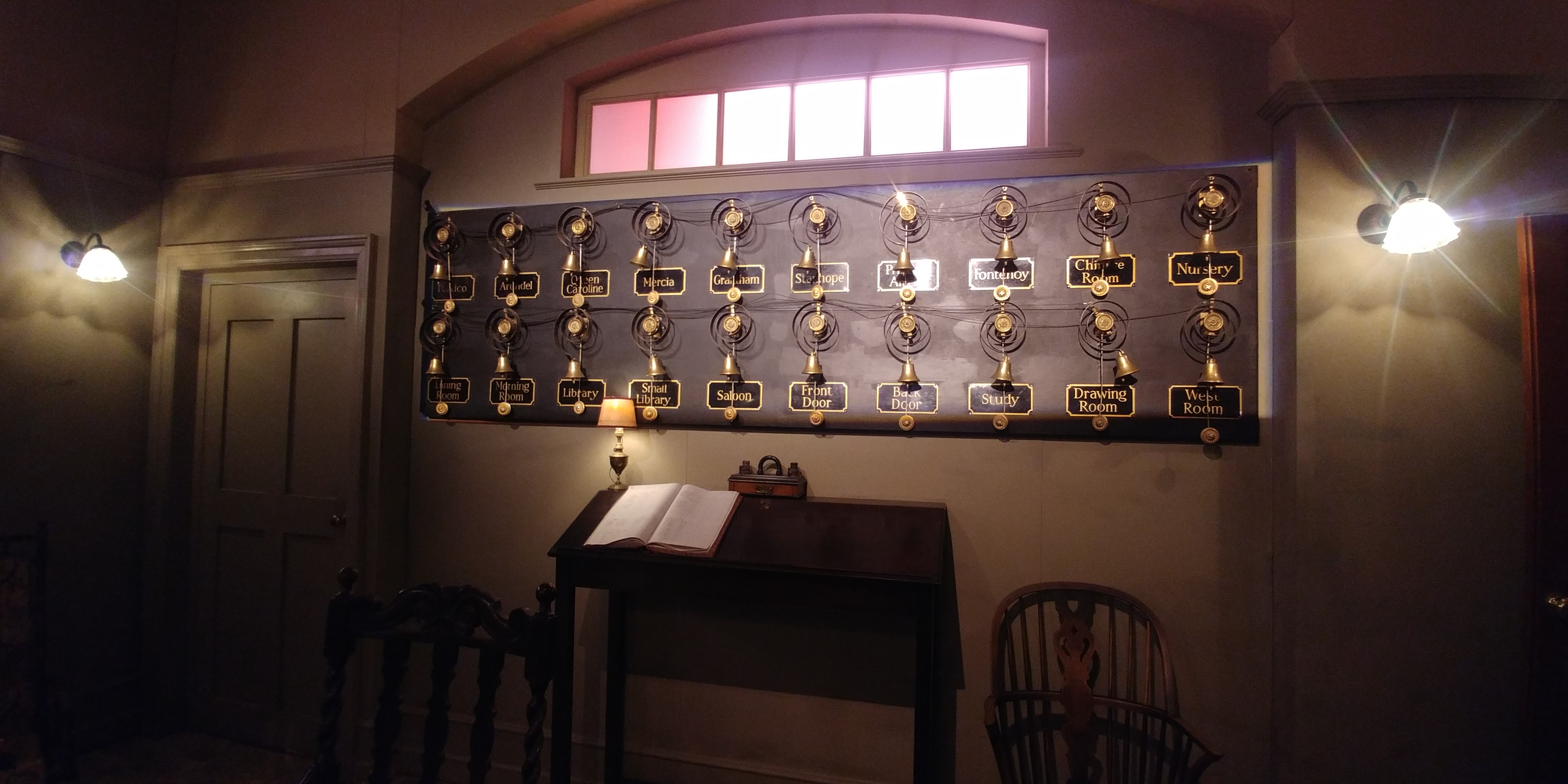 The Butler’s Pantry was also replicated for the exhibition, complete with Mr. Carson’s and Mrs. Hughes’ costumes. This room completes the Downstairs experience. 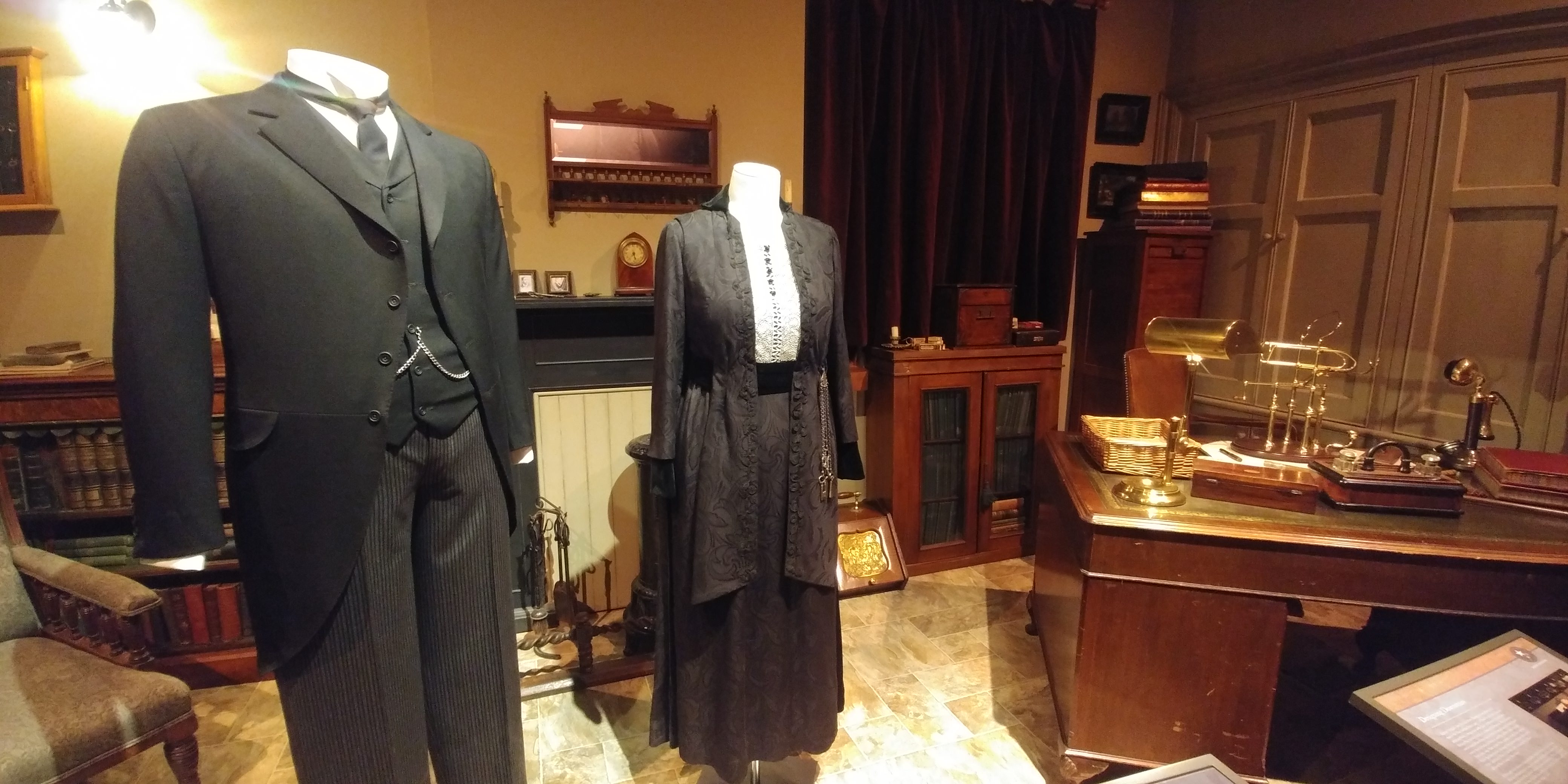 Then you take the stairs up to the next level and you enter through the same door way that separated the family and the staff world. I felt that the Downstairs section was done the best. I loved all of the room replications and, while there are other rooms that are recreated, there are not as many as on this initial floor.

You begin your journey into the family’s section of the house with a video room. Three of the walls are once screen showing the major changes in the family’s story throughout the series, including the war (which is what I have pictured below). This room also offers a moment to stop and sit on one of the benches, which I recommend. It took us a couple of hours to get through the whole exhibition, so a brief break was appreciated. 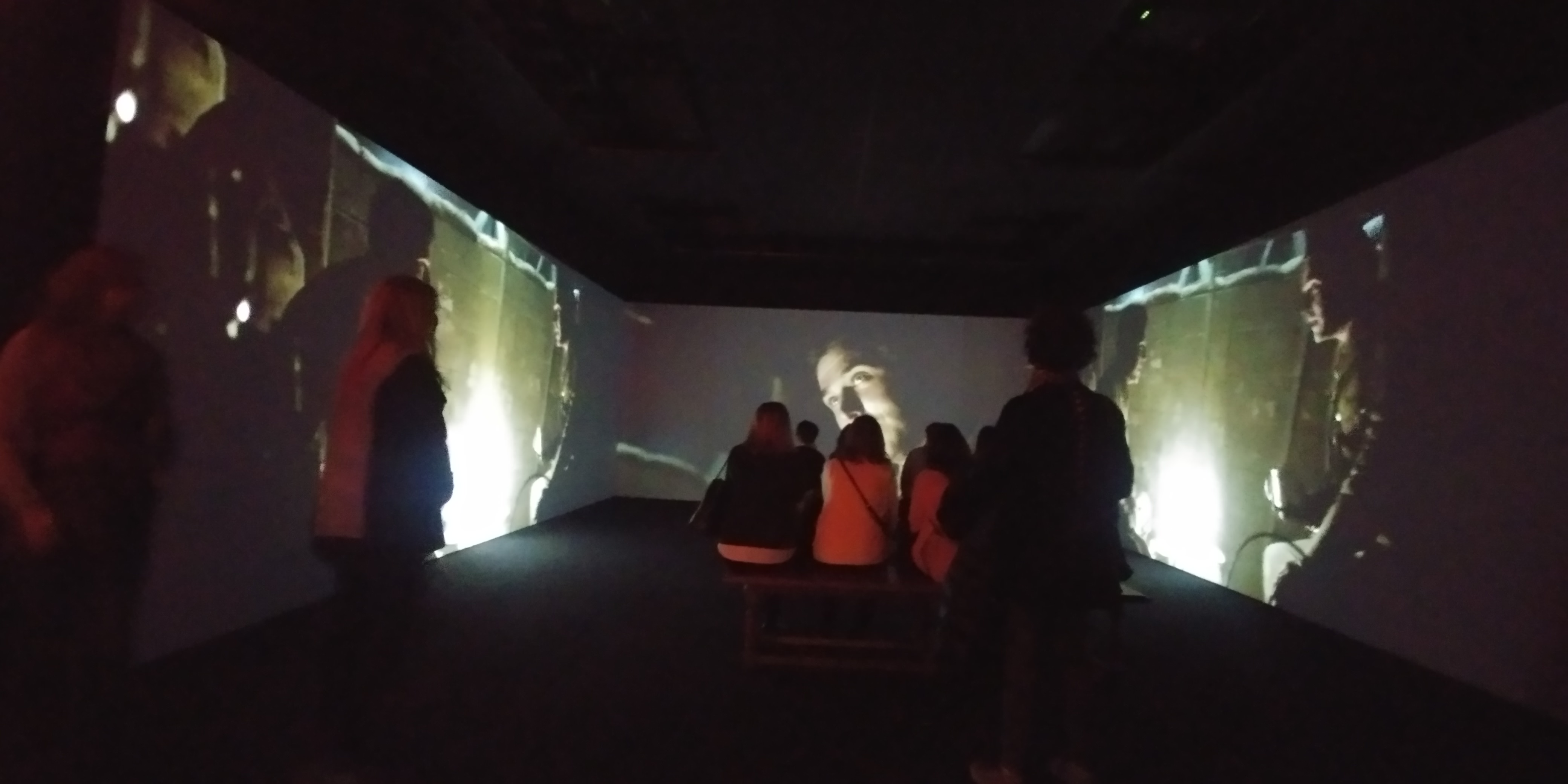 After the video room, there is a hallway with some of the costumes the family members and their friends wore, including these. Let me tell you, as pretty as the clothes were on screen, it did not do them justice. Seeing them, the dresses in particular, in real life is needed to truly appreciate how gorgeous they actually are. 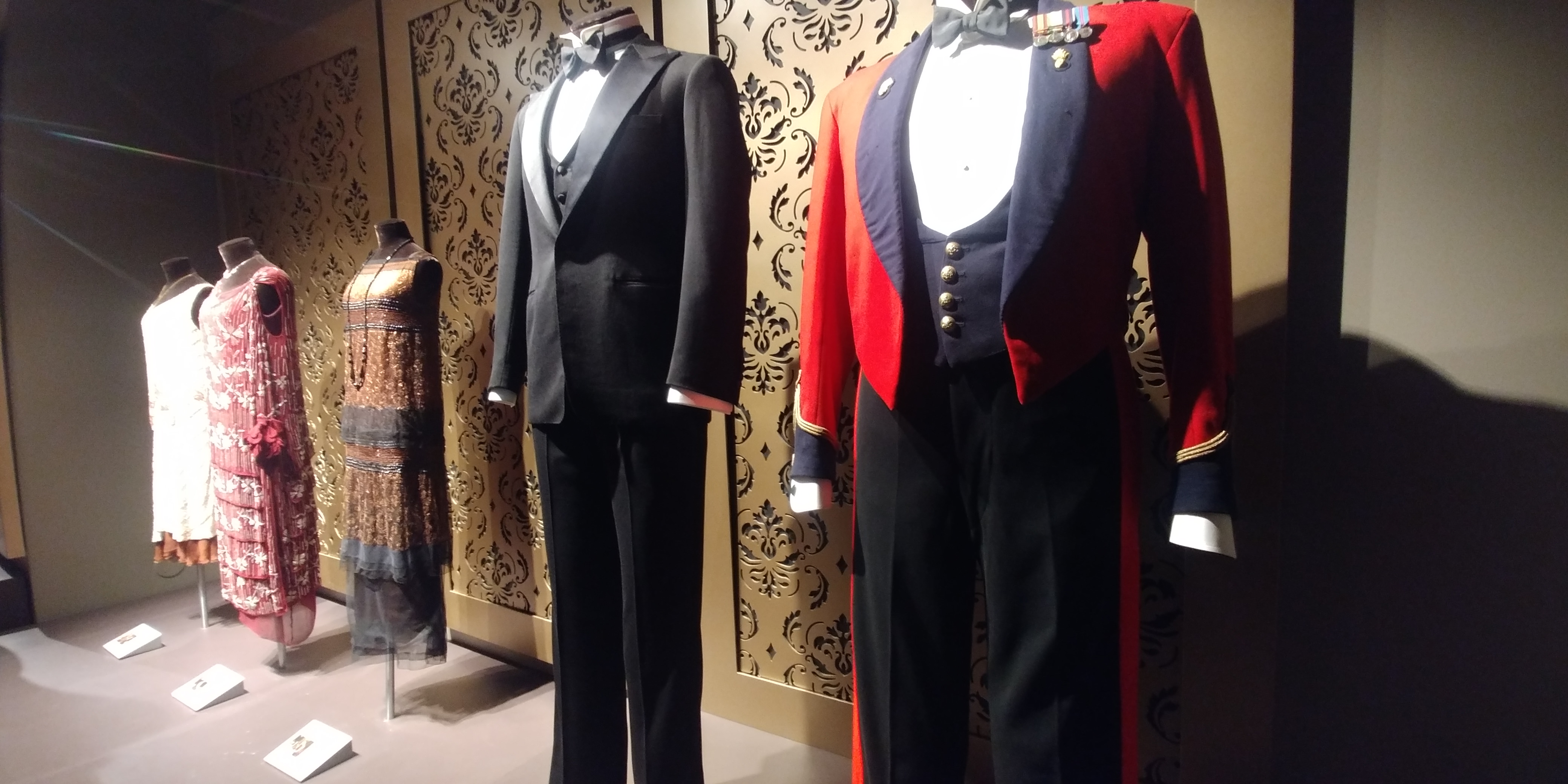 The hallway leads to the family’s dining room, which was spectacularly done. It also included a video on the table etiquette of that day, including how the hostess would lead the conversation and who talked to who by the direction in which she turned her head. 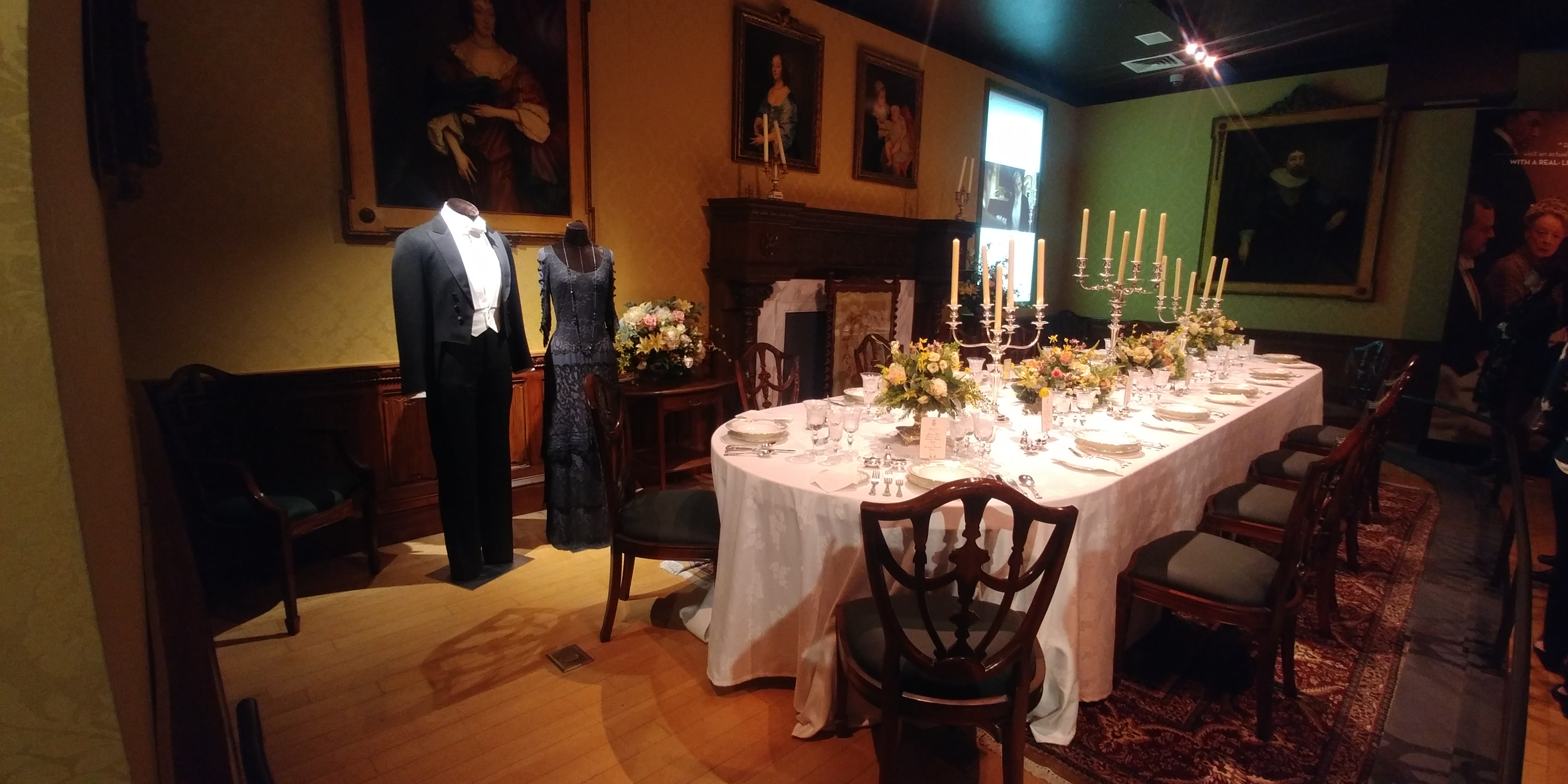 Mary’s bedroom followed the dining room and included a couple of her outfits, including her nightgown and kimono and a set of time appropriate underwear. This room concludes the set recreations for the family’s area of the house. 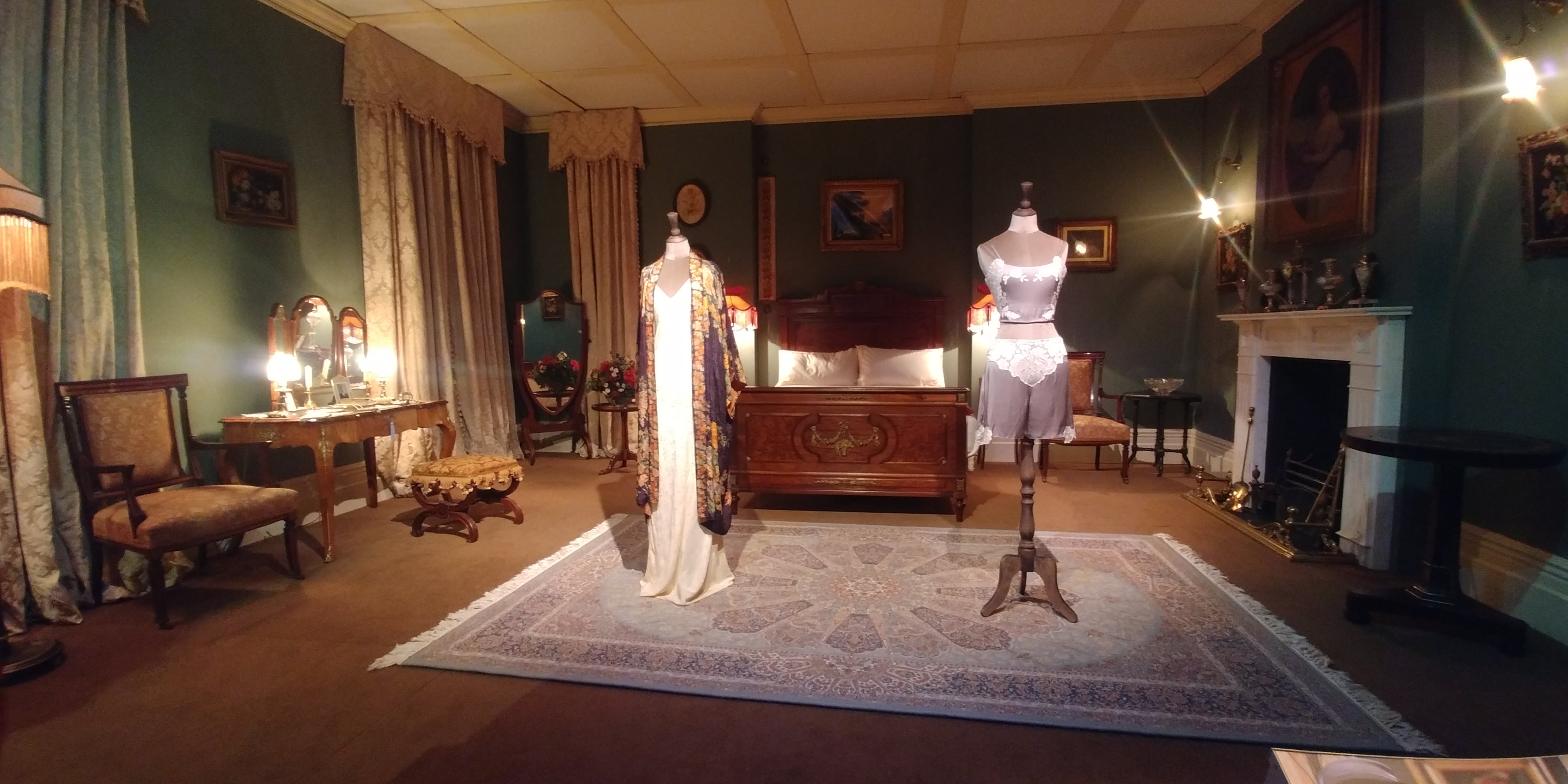 Of course the Dowager Countess must be represented, so they included a little area with Violet’s writing desk in the hallway leading from Mary’s room. It also included a video about her life and some of her costumes. 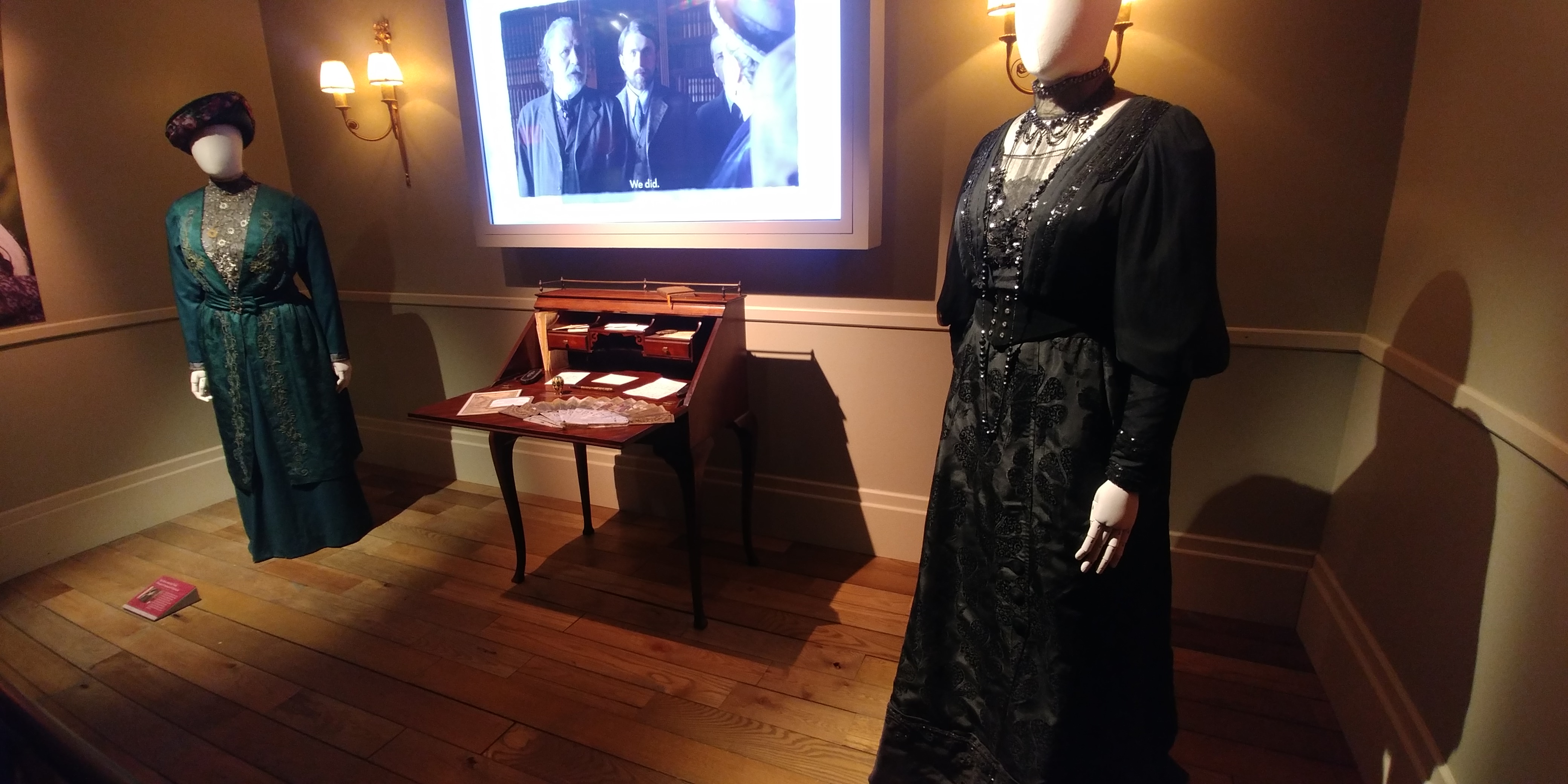 The hallway leads to an area that represents most, if not all, of the characters in the show. Each character has a tall video screen with his or her photo and it occasionally plays a pivotal scene from their story arch on the show. Each character has a couple of props that correspond with their character, as well. (And many of them are interactive!) Daisy, for example, had school books and Mrs. Levinson had one of her costumes (a detail you don’t see on the tv–the hat is covered in small feathers). There was a working phonograph and when you lift the telephone you can hear Mr. Carson answer it. 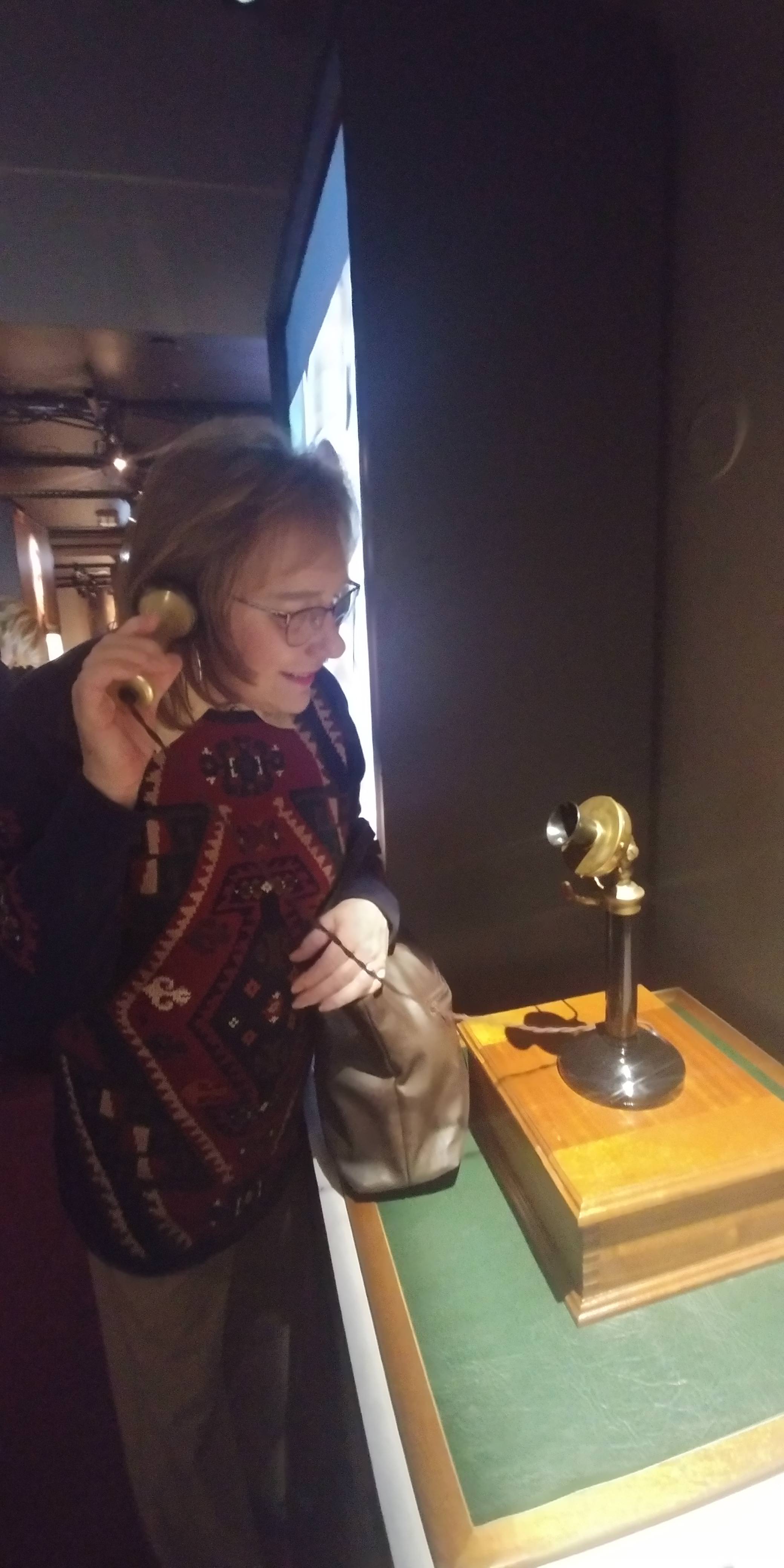 Once you have seen all of the characters bios, you go up to a third floor for a room of costumes, including the wedding dresses worm by Mary and Edith. 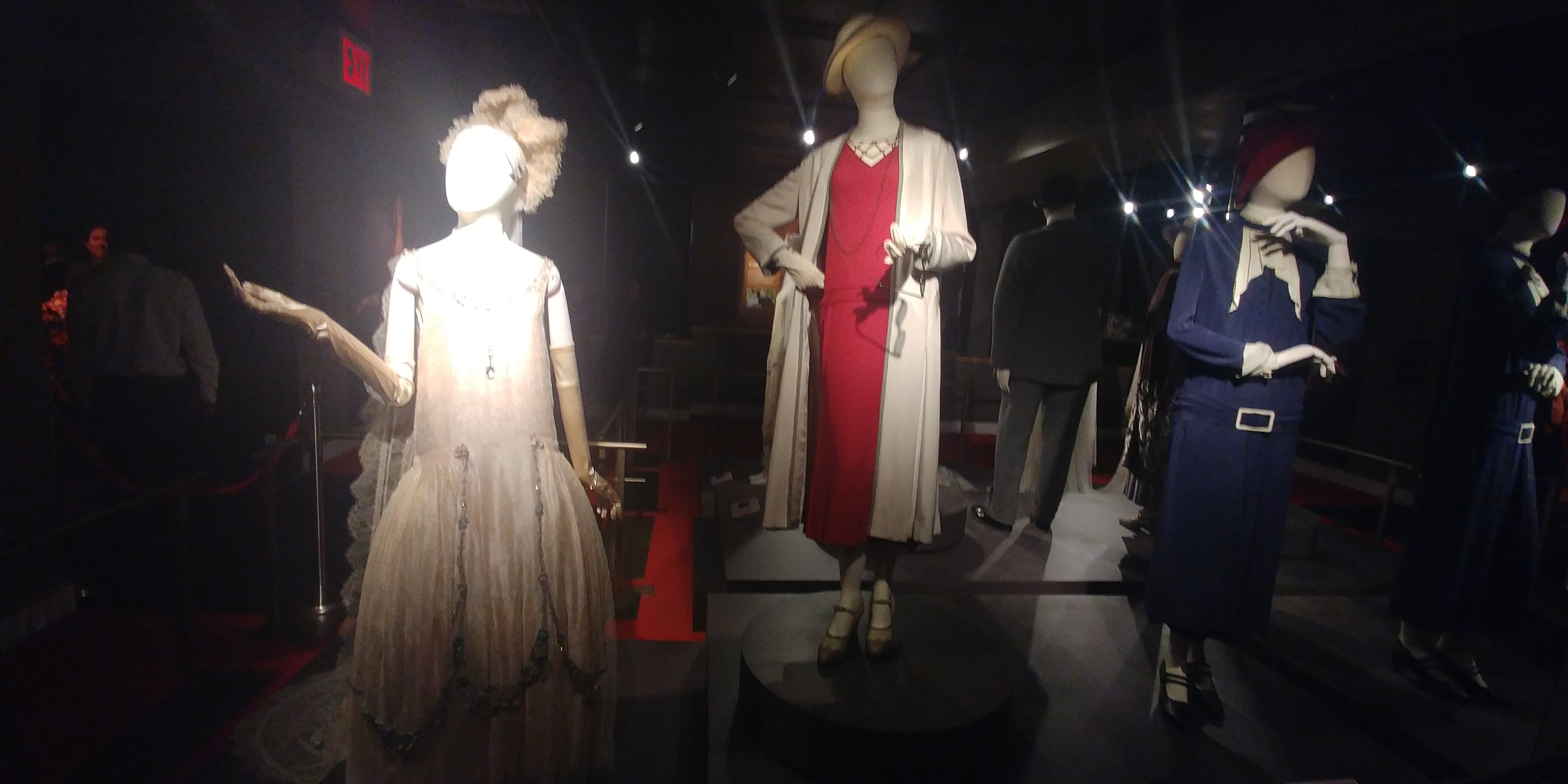 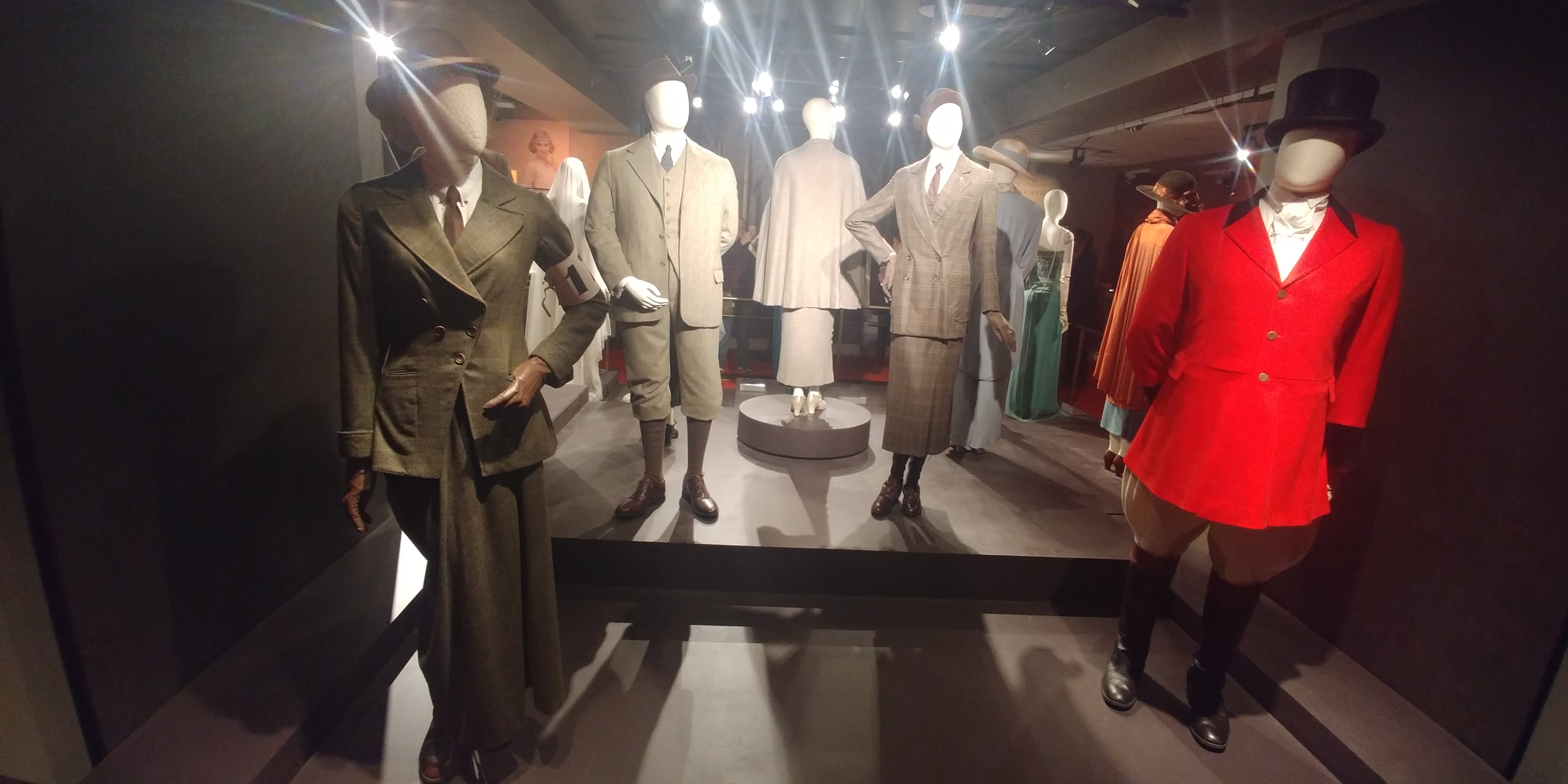 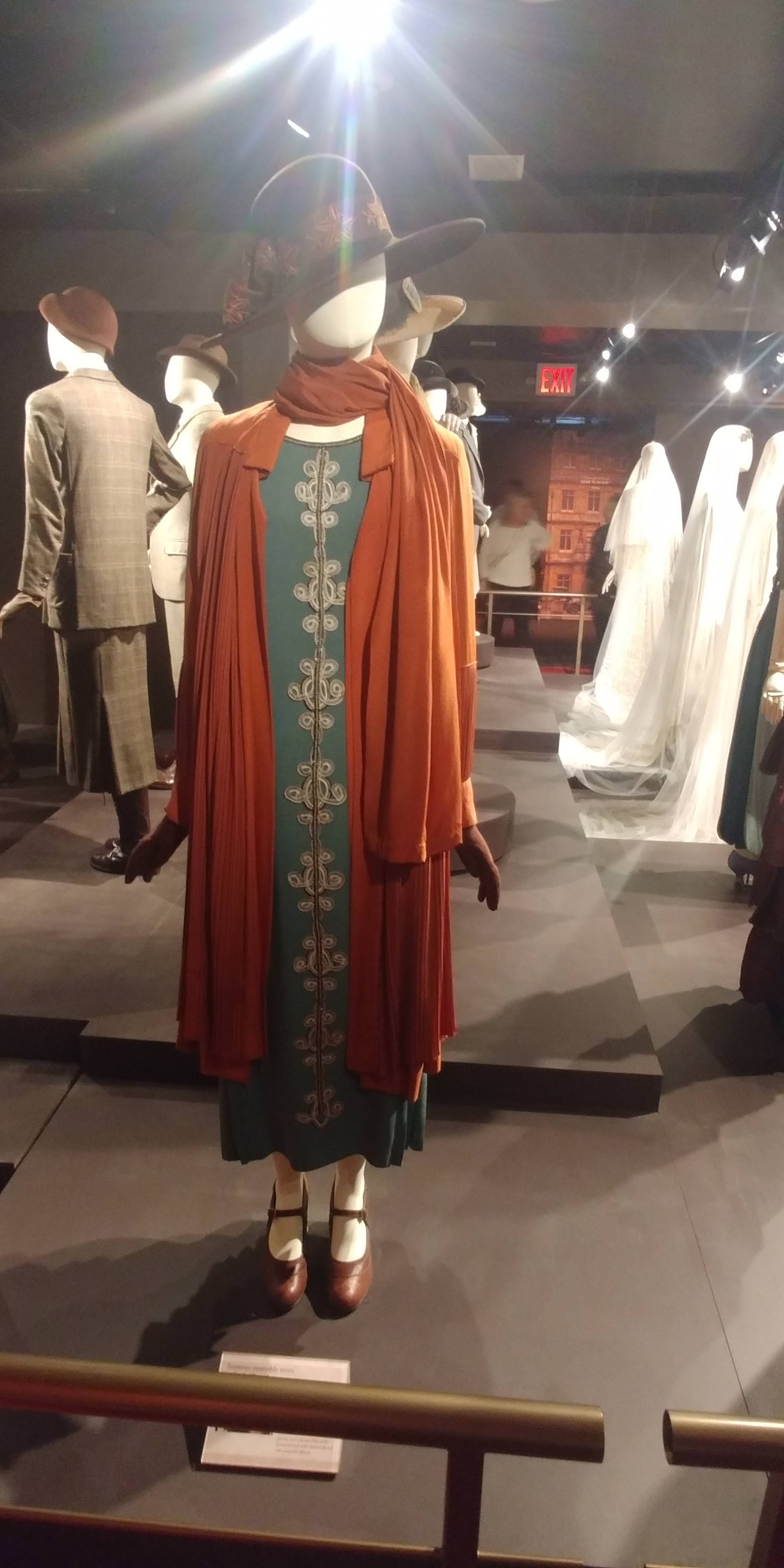 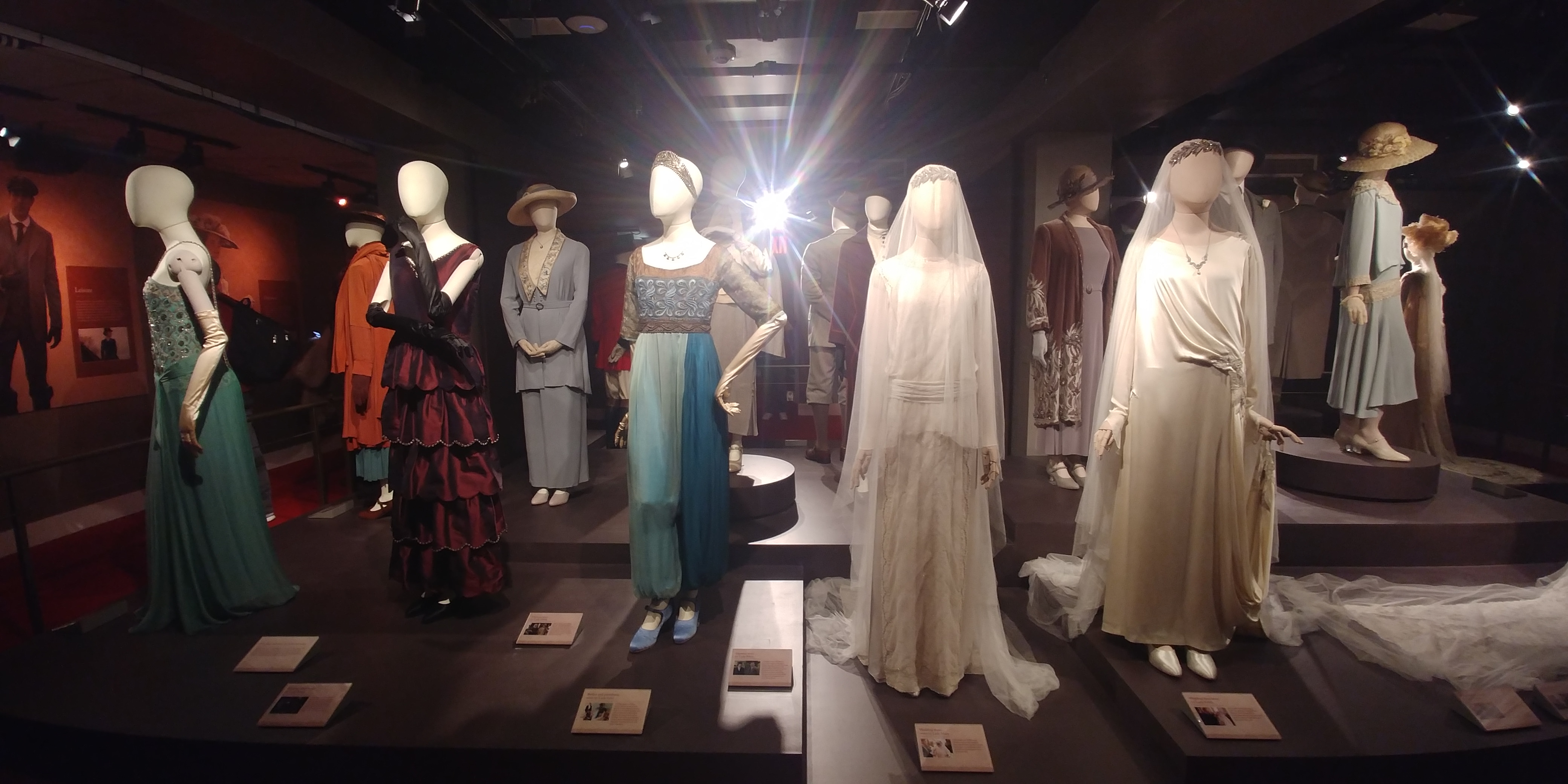 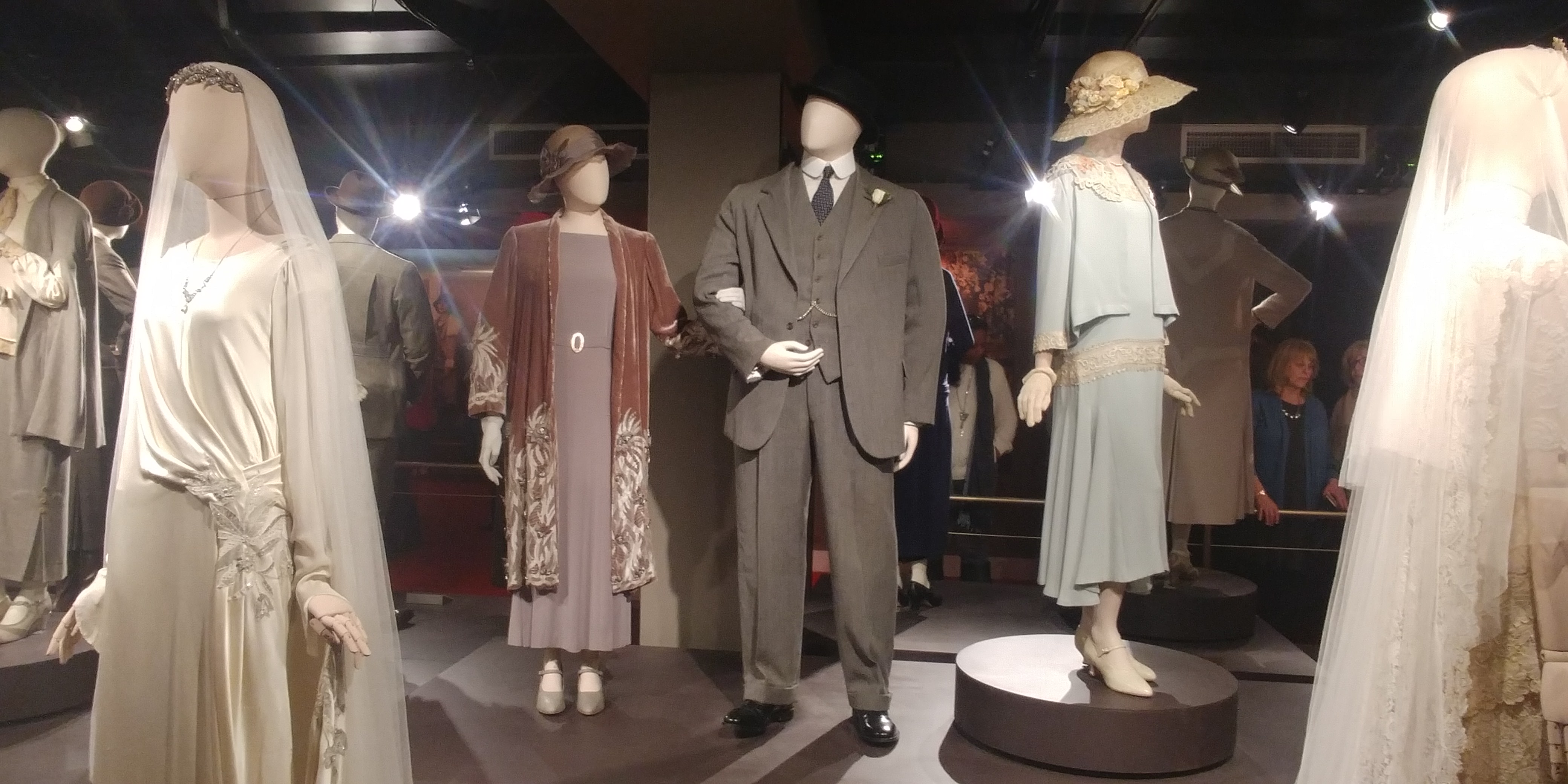 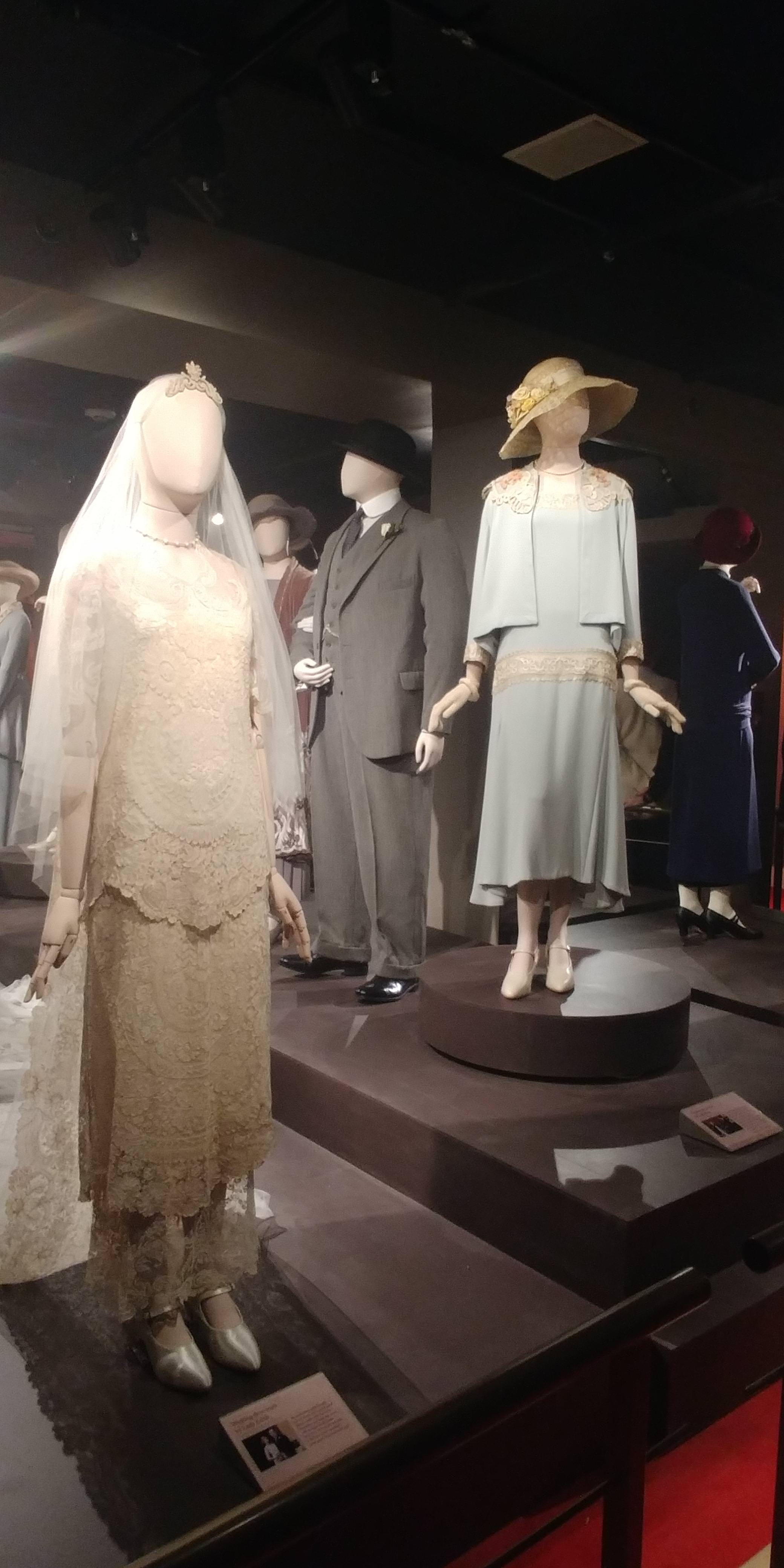 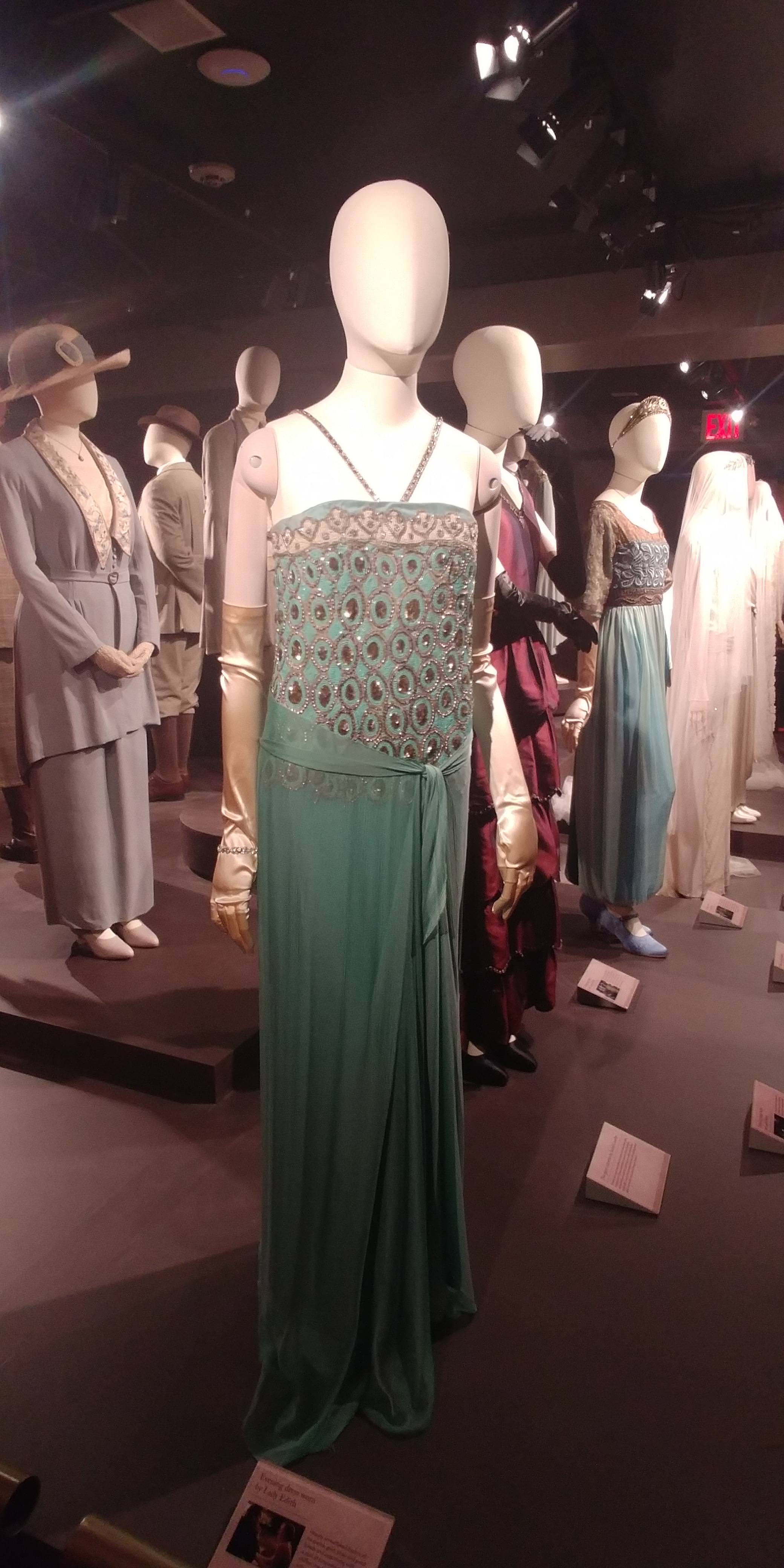 Once you complete the costume room, there is another room with the gong and a video thanking you for coming. It is similar to the introduction video, but saying goodbye rather than hello. Once you leave the exhibition rooms, you enter the gift shop, which includes all of the t-shirts, books, tea, and pillows you would expect. The items focus on the show, but there are also books about Highclere Castle today, too.

If you do everything at the exhibition, it takes a couple of hours, but it completely worth it for any fan of the show.